It’s impossible to talk about the history of the city of Amarillo without highlighting Route 66. Texas is the only state along Route 66 with just one major city along the historically significant route. That city is, of course, Amarillo. Located in the heart of the Texas Panhandle, Amarillo once embodied the essence of why Route 66 became a famous thoroughfare in the 1960s.

This new automobile-oriented society sparked the need for a paved infrastructure to connect the East and West coasts. To serve the throngs of road warriors making the trek across all or part of the country, vibrant stopovers sprang up alongside Route 66 in cities and towns across America.

Today in the city of Amarillo, one can still see the remnants of quaint restaurants, bizarre roadside attractions, old service stations, and architecturally significant buildings. The U.S. Route 66-Sixth Street Historic District is home to the most intact buildings that possess historical significance to the heyday of Route 66. 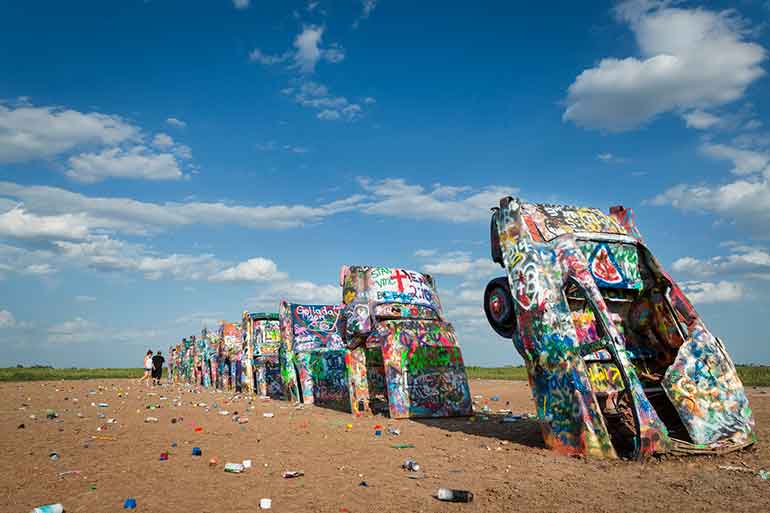 A public art installation created in the heyday of pop-art, the Cadillac Ranch is a classic Texas Landmark alongside Route 66 in the city of Amarillo. A group of artists from San Francisco partnered with Texas Millionaire Stanley Marsh the third to pay tribute to the evolution of the Cadillac Tailfin. Each of the 10 cars a buried nose-down in the ground, so they show off their tailfins. The post-war tailfin craze lasted for almost 20 years. 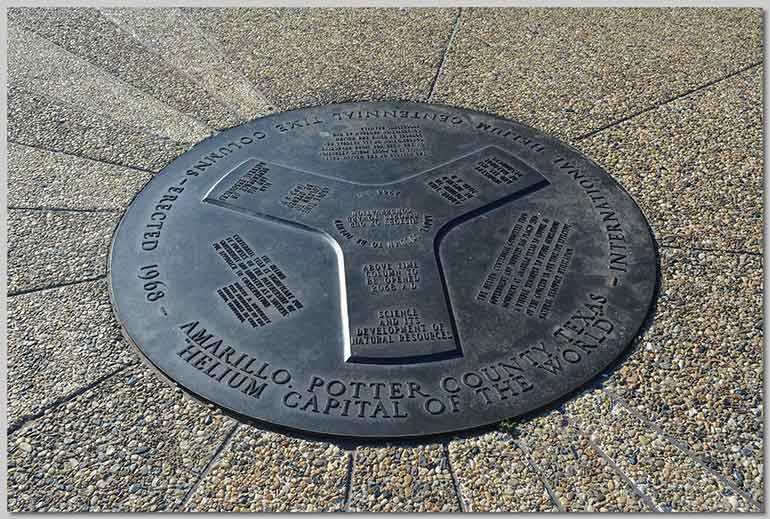 The six-story Helium Monument was erected in 1968 to commemorate the 100th anniversary of the discovery of helium. The monument has four time-capsules that hold books, artifacts, and documents to inform future generations what American life looked like in the 60s. Located in the front of the Don Harrington Discovery Center and Space Theater, the first time capsule was inaugurated in 1993, and the remaining three will be opened in 50, 100, and 1,000 years from the time of filling in 1968. 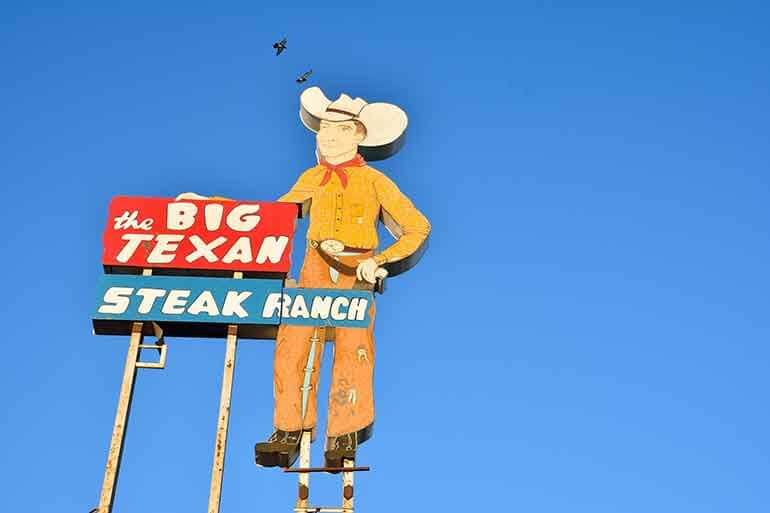 Just outside of the city of Amarillo is a famous Texas Landmark. Opened in 1960, the Big Texan Steak Ranch was originally located on the historic US 66. The restaurant moved to its current location in 1970 and then burned down in 1976 and was rebuilt in 1977. Today, this popular destination restaurant features a brewery, an RV park, motel, a gift shop, and a Route 66 zip line and maze. 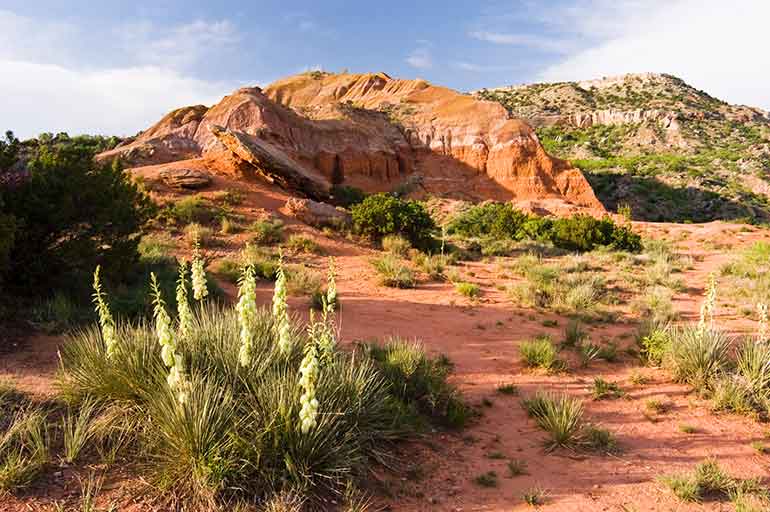 The city of Amarillo is 33 miles NW of Palo Duro Canyon State Park,i the second largest canyon system after the Grand Canyon in Arizona. There are plenty of things to do in Texas and visiting Palo Duro Canyon ranks high on that list. There are more than 30-miles of trails for hiking, mountain biking, and horseback riding. During the summer months, TEXAS (musical drama) runs Tuesdays through Sundays at the Pioneer Amphitheater in the park. 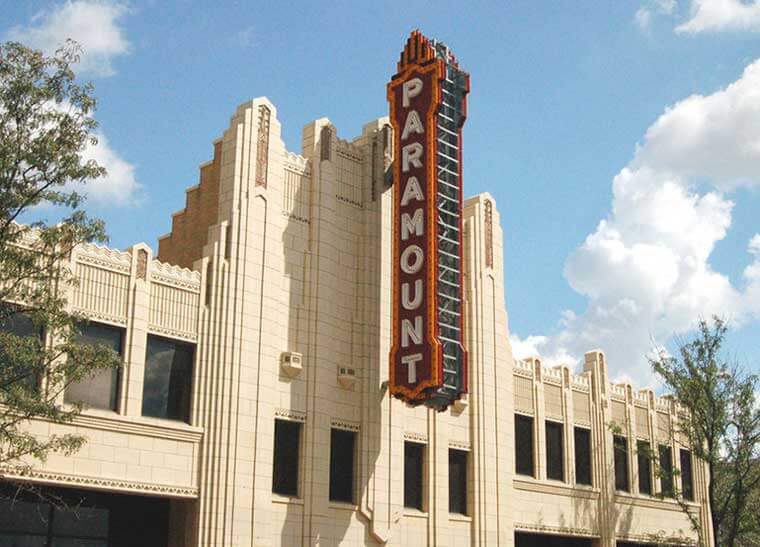 The Paramount Theatre opened in 1932. It was Amarillo’s premier first-run theater for several decades before closing its doors in 1975. The iconic neon sign is 33.5-feet high and holds 847 bulbs. Located at Ninth Avenue and Polk Street, the Old Paramount Theater Amarillo served as the gateway to downtown during the height of Route 66 popularity. The building’s terra cotta-clad exterior exemplifies Pueblo Deco architecture. Sadly, today the building serves as office space and part of the theater retrofitted to be a parking garage.

Encompassing 13 blocks in the San Jacinto Heights Addition west of the Amarillo central business district, the U.S. Route 66-Sixth Street Historic District is in the midst of a revival of sorts. During the 1920s, Sixth Street catered to auto campers, the precursor to the invention of the American RV.

The U.S. Route 66-Sixth Street Historic District evolved to becoming home to thriving pop and pop shops, restaurants, and service stations. These landmarks once catered to weary travelers making the journey across the country on Route 66.

Today, Amarillo’s Sixth Street Historic District is like stepping back in time; it’s home to several vintage service stations and numerous, historically significant buildings constructed from the 1920s through to the 1940s.

Moving to Amarillo in the near future? We’re here for you! Our clean and convenient storage facilities are easy-t0-access 365 days a year.

Find storage units in Amarillo to make your next transition easier.